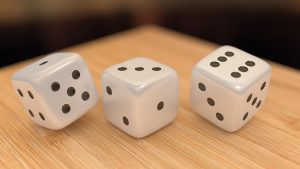 Sic Bo is a Chinese game played with dice and can often be found in the Asian games section of the casino. This game is about pure luck as players predict the outcome of three dice rolls.

But just what is Sic Bo and how do you play it? Read on to find out more about this fascinating dice game.

This game is a specialist title with a strong following of loyal players, and another set of players who have never heard of the strange Asian game or are intimidated by the large table with flashing electronic buttons. Don’t miss out on this gem!

The dice are normally rolled electronically in a dome and winning sections light up on the layout. The game is highly attractive visually with the elaborately lit table, bright colours and spinning dice.

Sic Bo is hugely popular in Asia and spread across to America in the early 20th century by Chinese immigrants.

There is an English variant of Sic Bo called Grand Hazard and an American variety, Chuck a Luck or Birdcage. Chuck a Luck has now mostly been replace with Sic Bo in Las Vegas.